Hey ho! What crazy times to be alive! But here we go for a new post on Graphs. To be more precise JGrahT library, a Java library I used quite at lot, recently. In this post I’m going to use one of the Scoring algorithms provided by the library to solve a SEO related problem. The idea is to give a taste of the library and some basic usage of it. Check it out!

Graph Theory was one of the most intimidating topics at the university for some. When you see graphs drawn on the white board, all makes sense, until you have to do some code yourself. Then you leave the university and may never see graphs again. I had better luck.

I recently worked in a travel company and the idea of graphs is simply the natural way to go. Travel companies are all about allowing people to travel from A to B, and then you have a graph!

DISCLAIMER: This post has no connection with that company, nor reflects the way systems were developed there. This post is just inspired in a hypothetical scenario related to travel and solving the problem of selecting the most relevant pages for a Home page of a website. Code is symbolic and shares nothing with any of the companies assets.

After using Neo4j, it was JGraphT that conquered me. It was a critical piece that allowed me to solve a 6 year long issue with Internal Linking. You can read more about this topic in this blog post: Nailing Internal Linking with Graph Theory.

Enough small talks. Time to see some code. Let’s give a problem statement so we introduce JGraphT and the ingredients to solve the problem:

Given a set of routes (pair of locations here represented just by their names), link from the home page of your website at most n pages so that upon visit, a bot can grasp page relevance, now that they are linked from the home page.

Well, in real life problem is slightly more complex. But for our pet project we just want to link from the home page, the pages that will cause the bots to “walk” the least possible in order to cover most of the graph.

The graph can be assembled out of the list of routes that have a page representing each of them:

Each route here represents a page connecting A to B. In other words, a page P connects location A to B. In cypher this is something like A-[:P]->B. Ok, image is better: 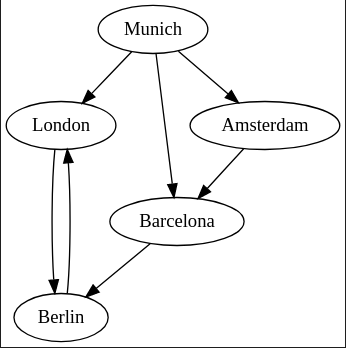 You can check couple Centrality scoring algos provided by JGraphT. Each having their own characteristics.

In our example we are going to use Betweenness Centrality. But there’s a catch. In this hypothetical scenario you find more pages than locations. Notice how Munich, Berlin, Barcelona repeats in that list. In real world you have potentially thousands of routes through cities like that. In order to save resources, it is a good idea to calculate scoring on locations instead of pages, thus reducing drastically the time you would eventually spend by taking this into production.

Our code to solve the problem does couple things. It uses a utility (not relevant for us) to import that CSV above as a Graph<Sring,DefaultEdge>. String for the sake of simplicity here.

Then pay attention to new LineGraphConverter. What it does is to actually create the graph of pages (remember that pages are any arbitrary edge that connects two locations). In this case the edges are represented by the JGraphT provided edge called DefaultEdge. As the name sasys, LineGraphConverter creates a line graph of “pages” (image soon).

We do this because we can use the original graph of locations, potentially much smaller, to run scoring and couple algos, but then our final output graph is a graph of pages, not locations.

Now two scores are calculated. The BetweennessCentrality of the original locations graph and a doubleSumScoreDecorator. The later is a custom VertexScoringAlgorithm that simply delegates the scoring of pages to the sum of the scores of the locations. Check it:

This class is total custom and a good way to extend JGraphT by decorating the any of the existing Scoring algos. Because a page is an edge in the location graph, but a vertex in the generated line graph, this decorator simply delegates calls to the original VertexScoringAlgorithm(a BetweennessCentrality above) and sum the scores of the source and target vertex of a page in the original location graph.

If, for instance, Berlin gets score 10 and London gets score 5, in the line graph the score of this page will be 15. This way we can create our end goal algo that takes as input our pages graph, the scoring and links the top most relevant pages out of a provided root (a home page) node.

Because we abstracted the scoring via VertexScoringAlgorithm, our TopPages algo is able to simply use whatever underlying implementation is provided. In the compute() method you see the scoring being used and sorted in descending order to finally link n(or better saying totalLinks) from the home page.

Is it the most optimal think? Yes, but… Yes because it mathematically makes it easy for bots to walk less, but you can see how two of the pages linked from Home are actually pointing to another page also already linked from Home. It is totally possible to optimize and prevent the Home to link to pages that are linked from the first layer of pages already. But it’s a long discussion.

Take it with a grain of salt given that this is a very small simple example. If you clone the repository and play a bit in the source file, you should be able to see quite different results. Give it a try.

Finally, the output CSV is exported and you should see something like:

This is the Edge List of links Page(A-B) to Page(A-B) pages, plus the generated links out of Home page.

You can find runnable code here in this repo.

With couple lines of code we were able to apply important graph concepts like centrality to solve a fairly real business problem. You can apply the same concepts for example to select the set of products to show in a home page of an e-commerce, or select the best blog articles in a huge content heavy blog, or perhaps select which courses to show in the home page of a educational site.

JGraphT is an amazing library and you can find a huge amount of algos for graphs. You can also use graph generation to randomly generate graphs for tests for example, this way you can make sure your algorithms are working with any (maybe most) graphs that may flow through it.

The only drawback is that once you reach considerably high number of nodes in a graph, you may have to start thinking about distributed graph processing tools like Apache Flink’s Gelly or Spark GraphX.

There are much more complex stuff on graphs, some of the problems are NP Complete. But you don’t need to invent a new graph algorithm or understand all click, degeneration, coloring, etc to take advantage of it. Start small, try to think if your next problem could be a good fit and give a try to JGraphT.

I had a precious chance to fairly deep project using Graphs and it gave me much more confidence on it and how useful graphs can be in a daily basis.

Import and export with JGraphT is pretty straightforward. It offers the Module org.jgrapht.io precisely for this. There you can find several formats to import/export, including CSV, Json and GML. The one use in this code was the CSV Importer.

It requires you to provide a target graph to load data onto. I used the EDGE_LIST because it’s extremely simple. Just line by line a coma separated list of location A and location B. I found importing from CSV a slightly limited option and used for testing only, for production we implemented data loading straight from BigQuery so we could preserve all attributes of the data we wanted in our application.

You are allowed to customize what that string means (setVertexFactory) in the CSV. In this case identity was used because there is no need to transform anything for vertex that are just the names of the locations.

For exporting, the semantic is quite similar:

For demo purpose I hard coded a fake url for each page that is simply travel- as a suffix for the departure and arrival locations.

Another very good integration is with graphviz. Check how you can customized to produce the second image of this post:

The exporter is flexible enough so you can decide what should be the labels and provide dot files specific configurations per node.

The first thing I was pushed back on JGraphT was he idea of Vertex and Edges. For me, after using Neo4j in production, a Vertex should be a full blow POJO, right? Same for Edges, right? Not really with JGraphT.

In JGraphT these two objects can be seen as simply ways to connect objects by some sort of reference. So for example, its a common thing to use in a real project only the ids of the nodes we wanted to represent as Vertex. If any other information is needed during processing, that extra bit could be fetched separately using those ids.

There are couple strategies suggested in the documentation, but the rule of thumb is: the simpler your Vertex/Edge object, the better. Just think of a Graph in JGraphT as a huge graph-shaped-index using ids of your objects.

RxJava is an implementation of ReactiveX, the ubiquitus API for dealing with reactive streams. There are much more languages supporting the API, including .NET, Scala and Others. Combine it with l...

Hello again! After more than a year without posting, here I am. This time I talk about a recent code challenge that I failed and for the sake for my peace of mind I’m sharing a working solution for...